BETTER FINANCE strongly supports the aim of the PRIIPs Regulation: to inform potential investors of essential information in a short, comprehensible format which they can easily compare with similar documents issued for other products.

However, the design and execution of the PRIIPs KID run against its admirable objective of “enabling retail investors to understand and compare the key features and risks” of the PRIIP (Art. 1 PRIIPs Regulation).

BETTER FINANCE reiterates the need for an urgent review of the PRIIPs Level 1 regulation (1296/2014) – which is legally required by the end of 2019 – in order to address several issues concerning the presentation of costs and performance scenarios.

The purpose of the PRIIPs KID is to enable investors to compare financial products and make informed decisions about their investments.

This is currently impossible due to:

1) Misleading performance information: the KID presents performance projections, which are not accurate and not probability weighted;

2) Confusing and incomparable cost information: the cost indicator (RiY) is based on non-standardised assumptions and is not disclosed to retail investors;

4) Unclear scope of coverage: uncertainty concerning corporate bonds have deterred issuers from selling them to the retail sector.

For more information, click on the other tabs or read here.

The PRIIPs Level 1 Regulation (1298/2016) requires product manufacturers to present “appropriate performance scenarios” of the investment product. Currently, performance scenarios use statistical modelling methods (such as Cornish-Fisher expansion or Bootstrapping) in order to predict four future results (favourable, moderate, unfavourable and stress scenarios) at 3 different point in times, as shown below:

However, these projections have several major flaws:

– none is probability weighted: the likelyhood of occurence is equal for all and ranges from 0%-100%;

– they are based on historical data: past performance is deemed to be an unreliable indicator of future results, so how is extrapolating from past returns to determine future results any better?

– they are based on past performance of just 5 years: these methods will project good or bad returns, based on the short-term past environment, leading to either overoptimistic or over-pessimistic projections

– none is accurate: in the graph below, none of the 4,986 estimations over 138 years have matched the actual outcome of the fund.

The PRIIPs KID presents a summary cost indicator (SRI) that is intended to show an overall figure of costs per year for the retail investor. The SRI uses a difficult to comprehend Reduction-in-Yield (RiY), which should show by how much costs have reduced the gross return.

However, this RiY is:

– estimated: it uses the moderate performance scenario to calculate the future RiY;

– non-transparent: the PRIIPs KID does not specify on what basis it is computed;

– incomparable: an RiY calculated on five years or on six years – even for the same product – is not at all the same;

Therefore, retail investors can’t know how much the product actually costs per year. Instead, they are presented with a potential cost for a moderate scenario over a potential investment horizon.

Key information documents normally inform investors about the period of time they are advised by the product manufacturer to keep their investment for. This is known as the recommended holding period (RHP), which has three consequences for the PRIIPs KID:

– confusion: on many occasions, KIDs indicate the recommended holding period as the minimum period an investment must be held for in order to, for instance, benefit from tax exemptions; whereas the RHP is the time horizon over which an investment should be kept in order to achieve its target; as such, it may confuse investors with regards to the investment horizon; 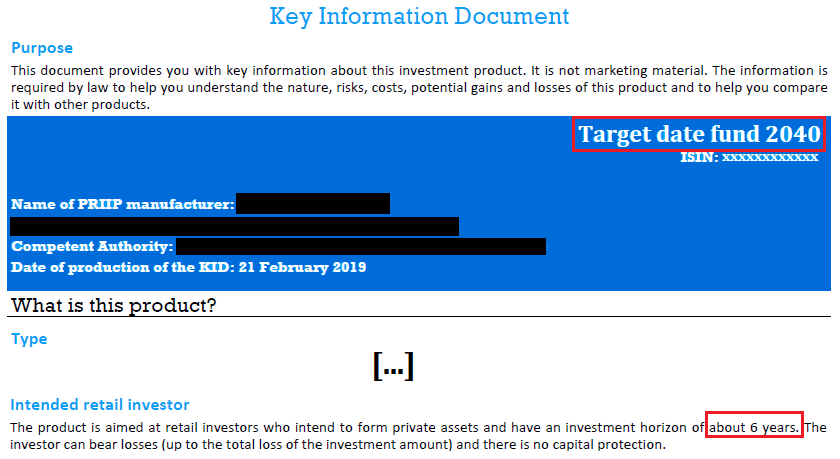 – performance projections: the chosen RHP will affect the intermediary and final future return projections shown in the KID;

– costs: the costs presented to the investor will differ based on the chosen RHP.

source: the image is not a mock, it’s taken from a real PRIIPs KID, but anonymised

BETTER FINANCE has been involved in the PRIIPs file since the begining, advocating for a simple, standardised, comparable and clear information document for all retail investment products across the EU (2009). BETTER FINANCE called on the European Parliament to put the interests of retail savers first through PRIIPs (2012), then recommended several improvements, such as disclosure of taxes and inducements (2013) and called to clarify and expand the scope to cover shares and bonds as well (2014).

BETTER FINANCE issued its first discussion paper on PRIIPs (2015) and participated in the initial ESMA consultation on Level 2 PRIIPs (2015-2016), following which we started to highlight the need for standardised past performance disclosure (2016). By the end of the year, EFAMA joined us in expressing concerns with regards to the implementation of PRIIPs, a position joined by the CFA Institute shortly after.

Our uphill struggle continued in 2017, including fighting political interests, but the voice of EU retail investors had less impact. BETTER FINANCE once more stressed the misleading and legally inconsistent nature of the PRIIPs KID regime in 2018 – most notably at the November 2018 public hearing – and continues to do so. As of 2019, we also started to provide input for the ESAs for the “quick fixes” at Level 2 through public consultations and participation to technical groups. We have participated at the European Supervisory Authorities’ (ESAs) Consumer Protection day, where we advocated on PRIIPs, and we were also part of the Technical Expert Group of the ESAs on the Review of PRIIPs Level 2.

Most recently, we have issued our Position Paper on PRIIPs and we find ourselves forced once more to campaign for the remediation of this PRIIPs KID regime that proves to be highly detrimental for investor protection.

Ten years later, BETTER FINANCE continues its unabated efforts to provide EU citizens with a clear, accurate and concise key information document that would allow them to:

– assess the quality and suitability of an investment product with their objectives; and

BETTER FINANCE urges the European Parliament and the Council of the EU to ask the European Commission to comply with its legal obligation enshrined in Article 33 of the PRIIPs Regulation and immediately start the review process of said Regulation.

In addition, with respect to the potential modifications to the Level 1 Regulation, BETTER FINANCE urges EU authorities to:

For any questions, requests of information or suggestions, you can contact us at:

Or you can call us at: