Trends: The power of the lobbies remains a major problem

A capital markets union, a banking union, strengthened financial supervision and making the European financial sector more sustainable... These are just a few of the ambitious proposals from the European Commission. Despite the opposition of Member States, many of those plans have been implemented over the last ten years. Although there is still a long way to go.

Guillaume Prache, Managing Director of BETTER FINANCE was interviewed for an article in Trends magazine on the disproportionate lobbying power of the financial industry in Brussels and the progress, or lack thereof, in terms of financial regulation and the protection of financial services users 10 years after the financial crisis:

“The biggest financial danger in the long-term is the retirement time-bomb that weighs on all European citizens. The state pensions will be insufficient, and the second pillar is not available to everyone. Moreover, the labour market is becoming increasingly fragmented. That is why there is a need for a simple and safe European pension savings product. We welcome the agreement on the PEPP, even though its fiscal harmonisation and central monitoring do not go far enough.”

On a Capital Markets Union:

“A Capital Markets Union will also allow for better use of European Citizens' savings in line with long-term needs such as housing, pensions and education.”

“Despite the new rules on investor protection, we note that banks still do not offer cheap and simple products. The main principle of MiFID II, namely clear and reliable information, remains the one least applied. Take any information document for a financial product, and 99% of people won't understand it. The principle of the PRIIPs regulation is very good: a uniform information obligation for various long-term savings products, including investment, savings and insurance products. Such a horizontal approach is ground-breaking. It just has to be done.”

“The logical consequence is that we are evolving towards a twin peaks model for financial supervision (cross-sectoral and cross-product rules of conduct on the one hand, and systemic risk and stability on the other). With such horizontal regulations, it makes no sense for supervisors to be restricted to their own sector or silo. Shortly after the crisis, there was still a small chance of getting the twin peaks model through. Unfortunately, it was not approved with the recent revision of the European financial regulators.” 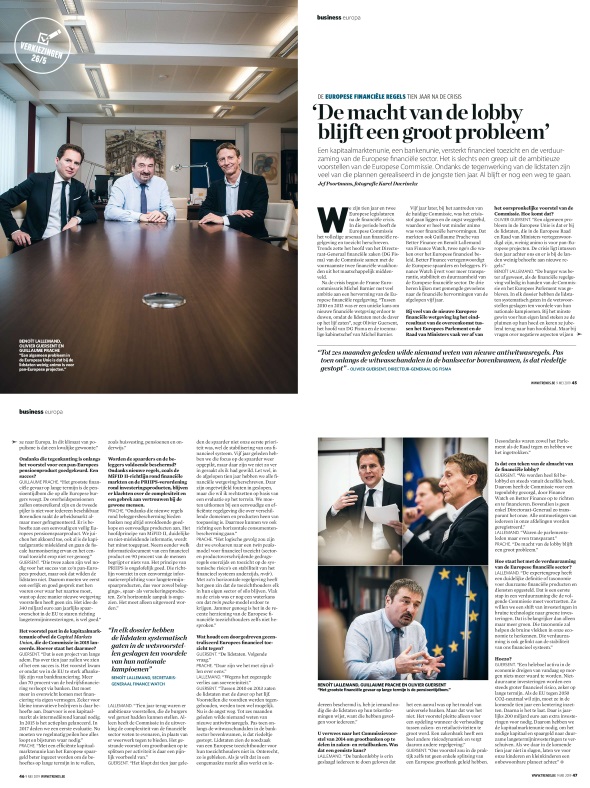 Save the Date: PEPP Conference & Launch of BETTER FINANCE 2020 Report on The Real Return of EU Pensions and Long-term Savings