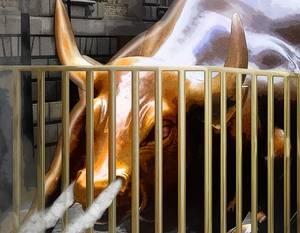 Only since the eruption of the financial crisis in 2007, and the outrageously expensive bailouts of banks and economies, has the public at large started understanding to what extent their countries are utterly indebted. It has become clear that nearly every government in Europe and in the United States has been living beyond its means. You would be forgiven for thinking that perhaps the time has come for insolvent debtors defaulting on their loans to hand over the collateral – to hand over their assets against which they borrowed…

The Ponzi scheme of sovereign bonds

…but you would be wrong. It is essential to realize that there is an important difference between private and public debt: individual borrowers and corporations usually are required to provide existing assets to serve as guarantee against their debt, whereas governments enjoy the privilege of being able to issue bonds without any collateral. This allows countries to borrow money from citizens who, in return, receive a bond that promises repayment of the principal plus interest. Rather than providing collateral, the state refinances rather than repays debts by printing new securities in order to replace the old ones. This way public debt is simply passed on to future generations.

And the problem doesn’t stop there. In turn this led to a situation where financial institutions became the main purchasers of sovereign bonds which they are not required by law to back with equity capital. Ultimately, everyone benefitted from this system: governments found in banks keen and steady customers for bonds, and in turn banks acquired fictitious assets that provided them with apparent security on their balance sheets. A lending spree of unseen proportions ensued.

This could not go on forever and in 2009 the illusion of risk-free debt created by governments around the world came to an abrupt end. Operating like illegal Ponzi schemes, governments and financial institutions were paying off old debt by constantly taking on new debt and deferring repayment further and further into the future with each new loan. But all pyramid schemes are unsustainable and eventually collapse as will any financial system that is based solely on debt.

Painkillers for a bad hangover

The party is over and the ensuing hangover has driven governments to look for strategies to reduce debt and its costs. Whereas growth is undoubtedly the best way forward, the reality is that developed countries are faced with an aging population, making growth very difficult to achieve. Ironically, governments are trying to create growth singlehandedly by taking on new debt to subsidise growth in order to pay off old debt.

Growth stimulation aside, governments have over the last few years to varying extents engaged in debt reduction methods such as increasing revenues through taxes or reducing spending by limiting goods and services provided by the state. These methods are preferable to the more drastic method of a debt haircut - effectively a government bankruptcy - where individual bondholders and other creditors such as banks and insurance companies - and through them all individual investors and savers - are forced to give up a large portion of the bonds for which they are owed. But what all these methods have in common is that the ordinary citizens, individual investors and savers end up footing the bill.

This brings us to yet another tactic that has slowly and covertly been creeping up on us: debt relief through inflation. As mentioned earlier, the total government debt in the developed world is too high for it to be significantly reduced through economic growth. And whereas austerity measures can to some degree keep debt in check, it can also easily choke recovery. This means that the debt must either be written off (but we just saw that defaults are seen as a last resort) or slowly inflated away.

This last option is a crucial element of what economists have started calling Financial Repression, a concept that is particularly effective at liquidating debt and penalising pension savers. It’s a term that you will never hear any government use as it carries a negative connotation and ultimately represents a form of wealth confiscation and redistribution but that in some ways is as effective as taxation and certainly less conspicuous.

Here’s roughly how it works:

With debt of the advanced economies in many cases spiralling out of control to close to (and in some cases over) 100 per cent of gross domestic product, Western governments desperately needed to find investors to buy bonds. In order to achieve this, governments implement policies to redirect funds to the state’s coffers that in a free market environment would go elsewhere.

By requiring banks and insurers to hold government debt via capital requirements and restricting the transfer of assets abroad, or by prohibiting or discouraging the use of alternatives, governments create a captive domestic market for government debt. Method to do so include providing financing at low interest rates with sovereign bonds as only collateral allowed (see the “Long Term Refinancing Operations” or LTROs of the European Central Bank) or have central banks buy sovereign bonds directly on the markets (For instance the quantitative easing campaigns in the United States).

Once this is done and the governments have managed to round up people’s savings, governments move to reduce interest rates on government debt and deposit rates, bringing about negative real interest rates across the board. To complete the picture, inflation is unleashed or kept alive through quantitative easing policies and currency devaluation, gradually reducing the sovereign debt but in the process also obliterating the value of all savings.

A Grey Future for Retirees

Some go as far as saying that industry rules such as the Basel III regulations and Europe’s Solvency II – the insurance industry rules that form the basis for the EU pensions regulation – are actually intended to produce financial repression.

The EU-wide Solvency II directive, for instance, would precipitate demand for government debt since the lack of capital charges on government bonds creates an incentive for financial institutions to acquire them to the detriment of corporate bonds or equities.

Carmen Reinhart, Professor of the International Financial System at Harvard Kennedy School, and expert on Financial Repression, is unambiguous when stating that “pensions are screwed [and that] governments have a lot of leverage on what kinds of assets pension funds hold. In France, for example, public pension funds have shifted money from shares to government bonds. Not because their returns are great, but because it is more expedient for the government. Pension funds, domestic banks and insurance companies are the most captive audiences, because governments can just change the rules of the game.”

Even though the statistics used did not include France, recent OECD findings showed that over the last five years real returns from private pension funds after inflation have been negative in many EU Member States. Following this, the European Federation of Financial Services Users (EuroFinUse) published ‘The Real Return of Private Pensions’ showing in their report that net returns to savers are often even less than the OECD data would suggest.

Still, pension funds will continue to be hard-pressed to buy into sovereign bonds and since these offer low or even negative real returns, funds will deplete. To a large degree government risk is being transferred inside pension funds to the great disadvantage of the end user and Europe’s pensioners.

Financial Repression – or financial policy designed to keep real interest rates low or negative combined with regulation to manipulate a captive market into investing in government debt – has revealed itself as a definite favourite among Western politicians and policymakers but ultimately amounts to the same as a significant increase in taxes in that it represents the confiscation of wealth by the state.

In Western democracies, tax hikes or the imposition of a new set of investor taxes to be used towards settling the debt need to be marketed convincingly to citizens in political campaigns and referenda as well as justified in governments’ budgets. Policies implemented to achieve Financial Repression, on the other hand, don’t need any justification or marketing. Financial Repression never becomes a campaign issue because voters and investors don't understand or even realise what is happening. This represents an enormous democratic deficit.

Basically Financial Repression takes advantage of the phenomenon of money illusion or the tendency of people to think of currency in nominal, rather than real, terms. In effect Financial Repression leads to price increases - including incomes and taxes - while debts remain nominally the same, thereby losing comparative value and decreasing in real terms. Debts are essentially eliminated by means of inflation whereas citizens loose purchasing power and are partially stripped of their financial means in the process.

If you flirt with inflation, you will end up marrying it

Although this does not justify its use, Financial Repression was very successful in eliminating Western debt following World War II. The current crisis, however, is very different.

With the war over in 1945, the aim was to service debts that had been incurred during the preceding decades. In addition the Bretton Woods financial system kept savers from seeking high returns abroad and high reserve requirements obliged banks to confine savings in safe assets such as government debt.

Nowadays the debts are projected into the future since they are based on long-term entitlement promises that are substantially greater than the current deficits of Western governments. In contrast to the post-war financial scene, capital now flows unimpeded around the world in search of high returns.

In addition to the fact that Financial Repression equals covert taxation and can be said to amount to theft - since no democratic process accompanies its implementation - it is crucial to emphasise the fact that sustained inflation is only effective in offloading old debt.

Besides, let’s not forget that the rate of inflation can easily get out of control and that, in the end, “if you flirt with inflation, you will end up marrying it”.